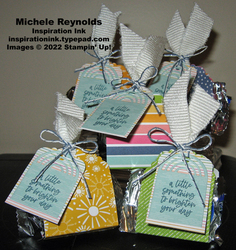 C ute and easy treat holders made with Stampin' Up! products.